The MiFID II and MiFIR abbreviations are used to represent European legislation on the provision and use of investment services and related financial instruments. MiFID II - the updated Markets in Financial Instruments Directive, and MiFIR (Markets in Financial Instruments Regulation) were introduced in the EU on January 3, 2018. However, the directive and regulation, as well as related implementation standards are commonly known under the name MiFID II.

MiFID II is a very wide range of measures and obligations for financial instrument markets. The professional public, financiers and investors, often ponder why Europe needs such extensive regulation in this sector. For many, the MiFID II regulation is overly complex and strict. The main reasons for the introduction of MiFID II are increasing investor protection on financial markets, ensuring trading transparency, tightening the rules of the prior regulation in this sector, and unifying the investment service market in Europe. MiFID II also has the goal of taking into account the technological progress, especially relating to the automation of realizing deals on the financial market. Outlined in the text below are the main characteristics of the MiFID II regulation, and requirements on investment companies and financial market participants.

The History and Evolution of the MiFID Regulation

In the 90s, financial and investment services in the 15-member EU were regulated by the Investment Services Directive (ISD). The directive covered all investment companies (i.e. securities dealers), however some provisions were not applicable to credit institutions (i.e. banks). The main criteria for providing investment services under the ISD was ensuring sufficient financial resources (capital) and the professionalism and experience of management and shareholders.

After the year 2000, new approaches began to be applied in the EU, known as the “Lamfalussy Process.” Alexandre Lamfalussy was a well-known economist and central banker, who chaired the EU regulatory advisory board known as the “Committee of Wise Men on the Regulation of European Securities Markets” from 2000 to 2001. The recommendations of the Lamfalussy process contained 4 levels:

The Lamfalussy process became the basis for the creation of the MiFID regulation, which was approved on April 27, 2004. Apart from the MiFID directive, 3 other directives for the regulation of EU financial markets (the Market Abuse Directive, the Prospectus Directive, and the Transparency Directive) arose from the recommendations of this commission. Though the recommendations of the Lamfalussy commission brought many benefits from the perspective of regulation (such as consistent interpretation), the new rules brought a wave of criticism (mainly due to the overly technocratic approach).

The Markets in Financial Instruments Directive, known as MiFID, was introduced on November 1, 2007. For Europe, this meant several fundamental changes, such as the implementation of a harmonized investment services regulation. The main goal was to increase competitiveness and protect investors.

The MiFID regulation maintained the so-called “EU passport” principle that the ISD introduced, but it also placed emphasis on unifying rules and rigorous supervision within the individual EU countries. Despite this, weak areas were revealed during the 2007-2008 financial crisis and the MiFID regulation was reworked. The recommendations for the fixing of this regulation were prepared by the “de Larosière Group” in their February 2009 report.

A direct result of the recommendations of the de Larosière Group was the establishment of the decentralized network of the European System of Financial Supervision (ESFS), which from January 2011 replaced the current European supervisory network, associated with the Committee of European Securities Regulators (CESR). The CESR was the advisory body of the European Commission, while the ESFS financial authorities are direct supervisors of financial institutions.

ESMA, whose goals and mission are improving investor protections and setting a stable and disciplined financial market and financial stability, was charged with fixing MiFID. ESMA enforces its goal through 4 main activities: 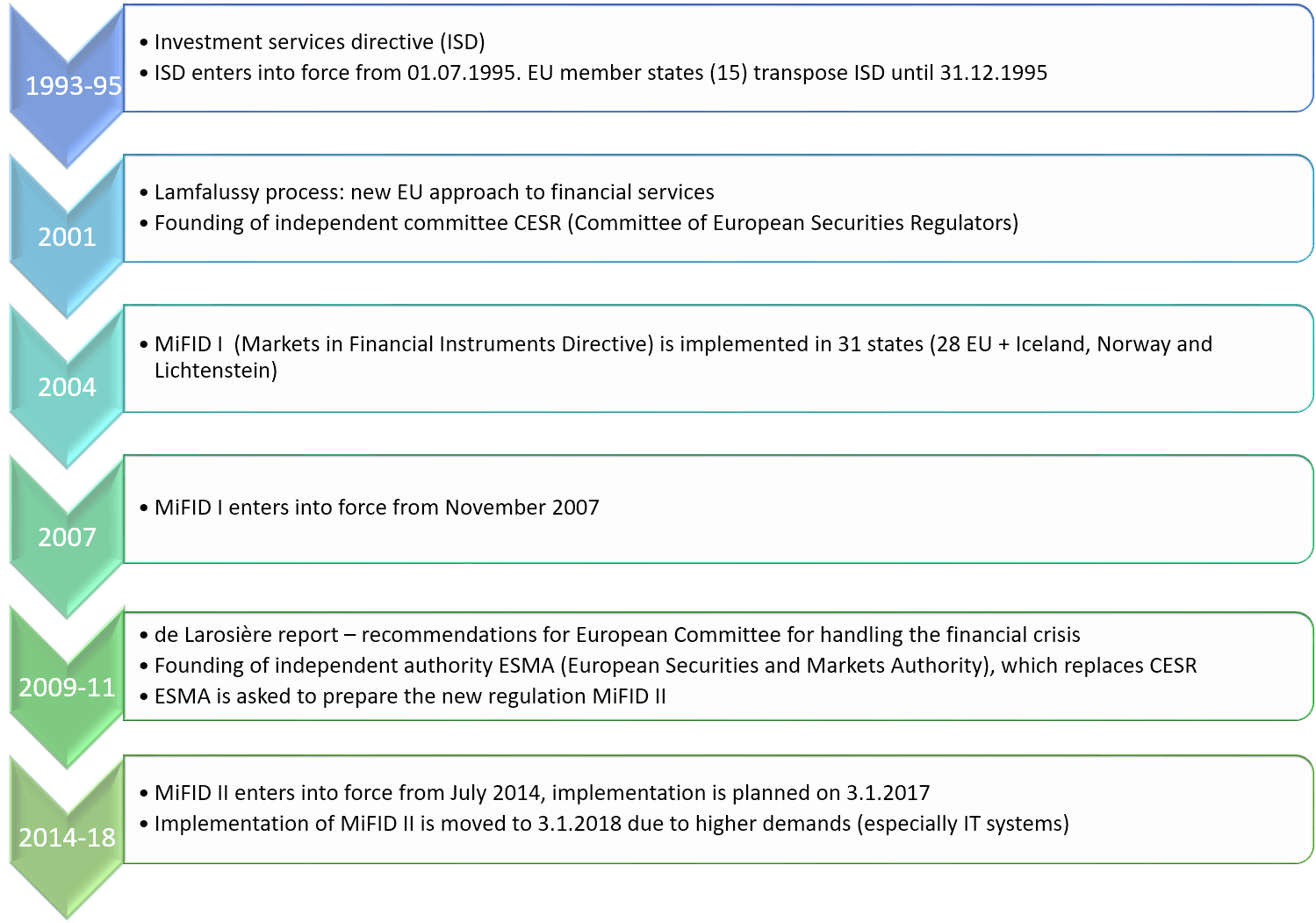